Wahoo!!  I finally did it.  After seven plus months of planning, training, reading, and obsessing... I made a triathlete out of me!!
My mom offered to go with me, which was kind of surprising and very welcome.  I lugged Komet onto the train with just one backpack stuffed with everything I needed for the weekend. We drove to Effingham - about a Loooooong 5 hour drive and made a pit stop at the Sullivan Civic Center to check out the area.  And hopefully bike the run.  NO such luck... the run was a trail!  EEEKS - one more thing to stress about.
When we got back to Effingham, we checked into the hotel and chilled a bit before heading to dinner.  My parents have a passion for finding new and interesting restaurants... they even had one in Effingham.  I was able to get the coach approved steak and mashed potatoes with a big cold beer.  Perfect!  I was in bed and asleep good and early with no drama.
Six AM alarm just needed to be turned off as I had been awake since 4am 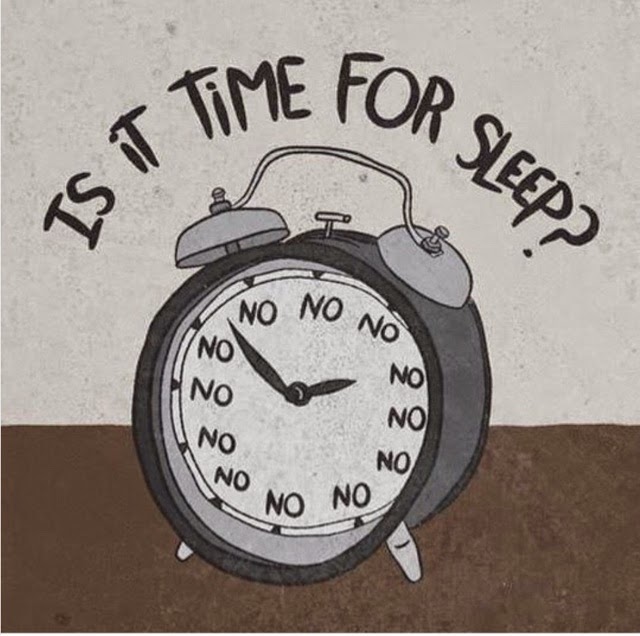 I was strapped in the 'Sausage Suit'... as my not so very funny father decided it should be called... and down for breakfast by 6:30.   I had 1/2 bagel, 1T peanut butter and a banana with the coffee I never ever skip!  This will be my go to meal for Sprints.  It was enough but I didn't feel uncomfortable.

We loaded up and made the 30 mile trek back over to Sullivan for the 8 am packet pick up.  This tri seems to be a very local thing and everyone just 'knows' what to do.  Which was awkward for a newbie... but I walked away marked, bibbed and tagged easy enough.  My bib number was 140 - which made my over emotional brain get a bit wound up (not for the first time).  My high school and adult softball jersey was 14!!!  My lucky number!!  Wahoo! 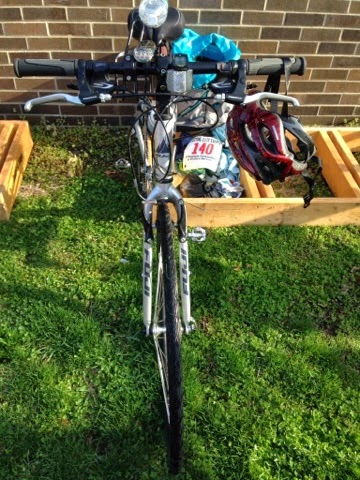 Transition set up was great.  My coach had me walk through this quite a bit leading up to The  Big Day so I was super comfortable with only 95 minutes to kill before the first swimmer in the pool. This was a long 95 minutes. 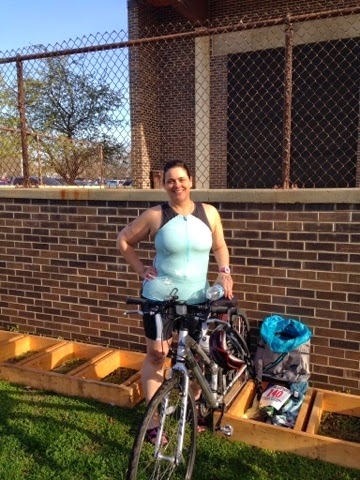 The pool side athlete's talk told me at bib number 140 out of 150 competitors I would be in the pool nearly last, eh!
SWIM...
The swim was a pool 400 meters serpentine style.  Meaning at one end you turn around and come back down the lane to go under the rope at the opposite end. There were so many people ( some walking!!!) that I couldn't flip turn without knocking someone in the head... le sigh.
I finally get to the end and hop out. 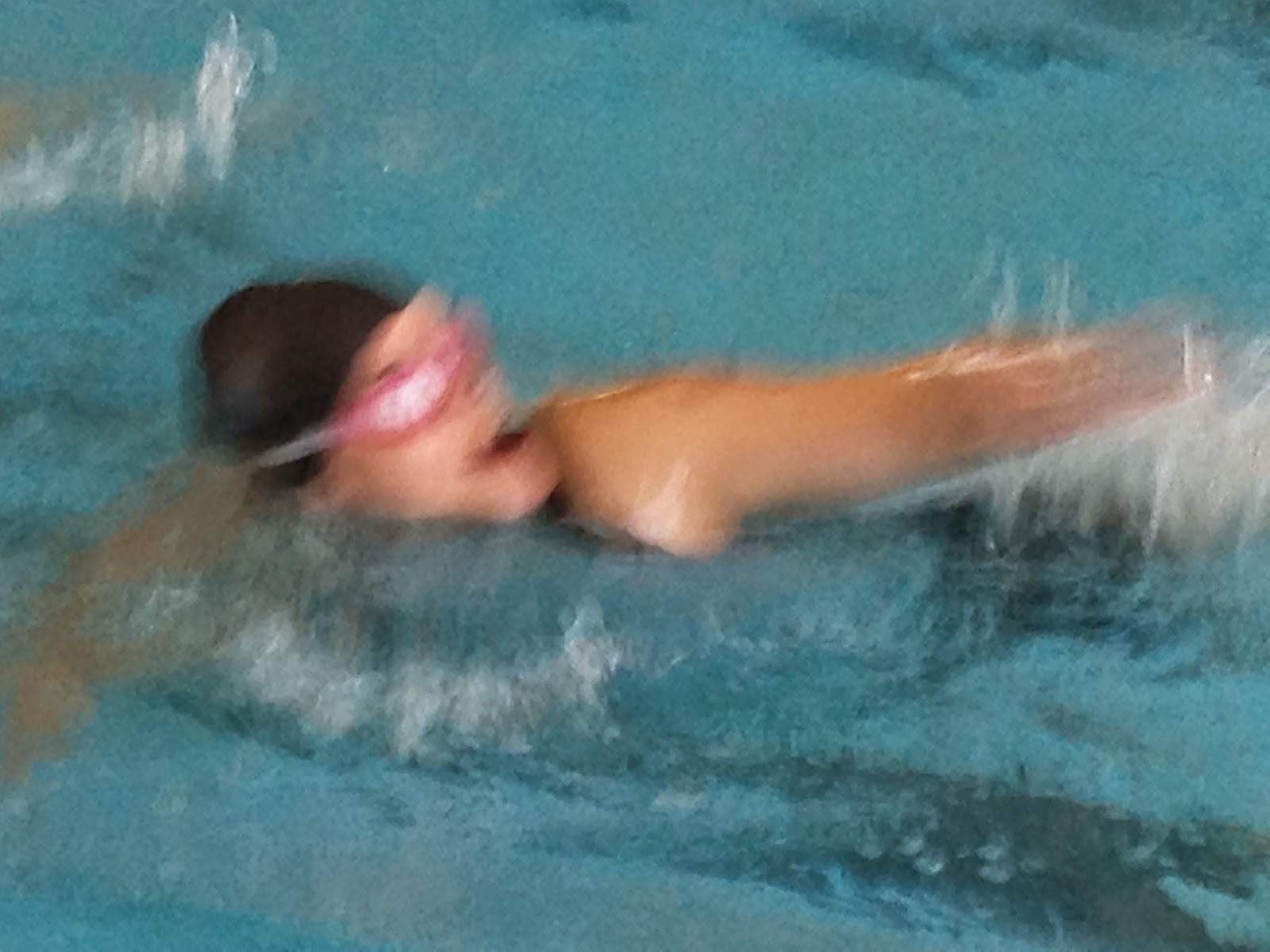 T1
As I am jogging to my transition area ripping off my top (to swap for a dry long sleeve jersey) my mom yells… Wait, smile I need a picture.  I am so happy my parents came for my first tri and that she was excited and wanted pictures… But seriously, I am 4th from the last person out of the pool.... I am in a race - I may have whined this at her like a 10 year old... but picture posing was not on my agenda!

The ride was cold and windy and I had a hard time staying at a good cadence.  I did pass two people – one of them being 12 does not matter!!!  I had a heck of a time catching my breath and getting my heart rate under control.  Usually on the bike these things level out – but race adrenaline is a real thing!!  I had the coach prescribed gu at mile 12 and was happy to be back in transition. 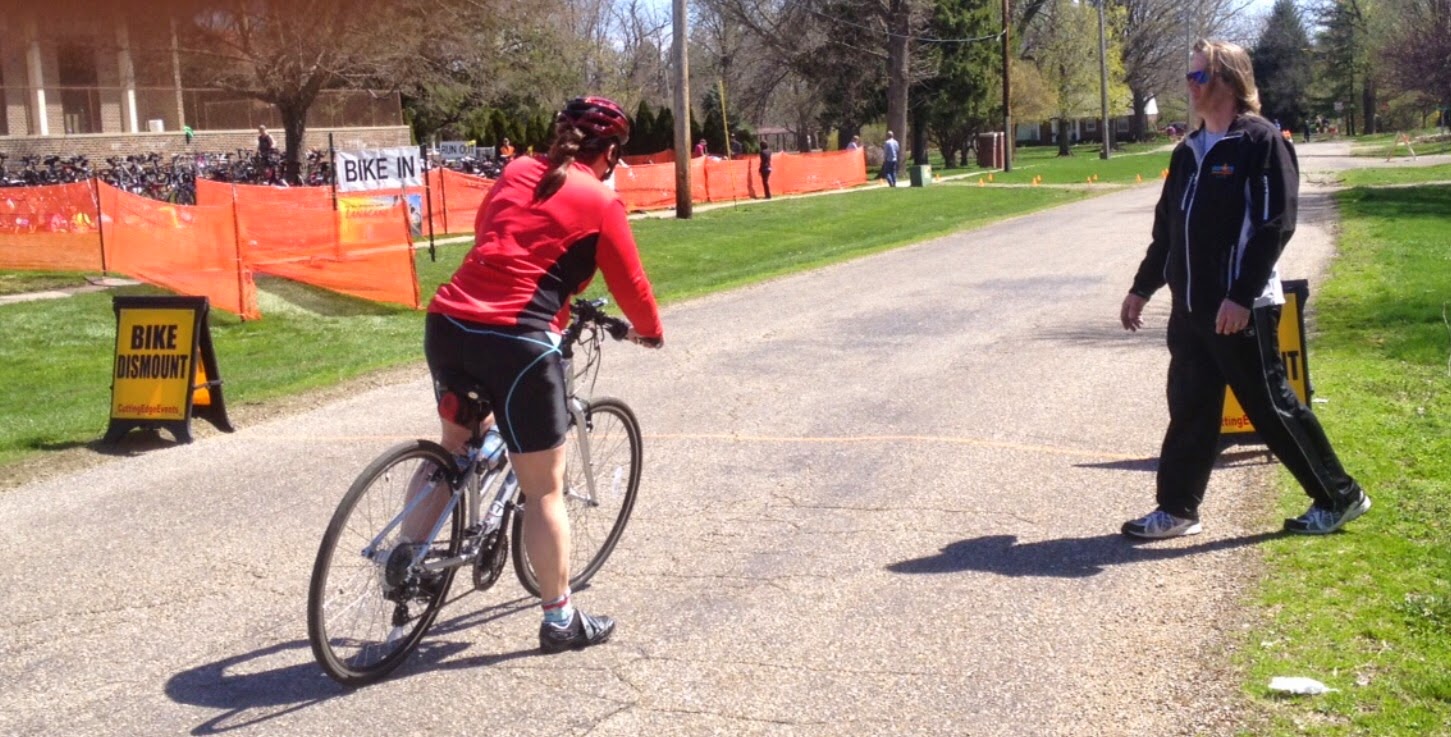 
Where my mom asks ‘Did you see what your brother posted on facebook?’… yeah, while I stopped in at the coffee shop – and you had my phone?!?!?!?  Apparently, I am still grumpy.


I am 90% happy with race day but one thing I regret is not running out of T2.  I just couldn’t get my legs to turn over and mentally was struggling a bit.  I walked about 50 yards to the start of the trail run.  I would run if I could do it again.


This course – bike and run had NO… ZERO… NOT ONE SINGLE mile marker.  WTF  The trail was marked with a bit of orange paint arrows and yellow caution tape ‘blocked’ off the  path to kind of keep you on track.  But I have no idea if I followed it correctly.  If I learn that I ran an extra .5 miles I would not be surprised (which might explain some of my splits).  The trail run was completely new to me and slowed me down a bit.  But the upside is the knees were 100% happy every single step. 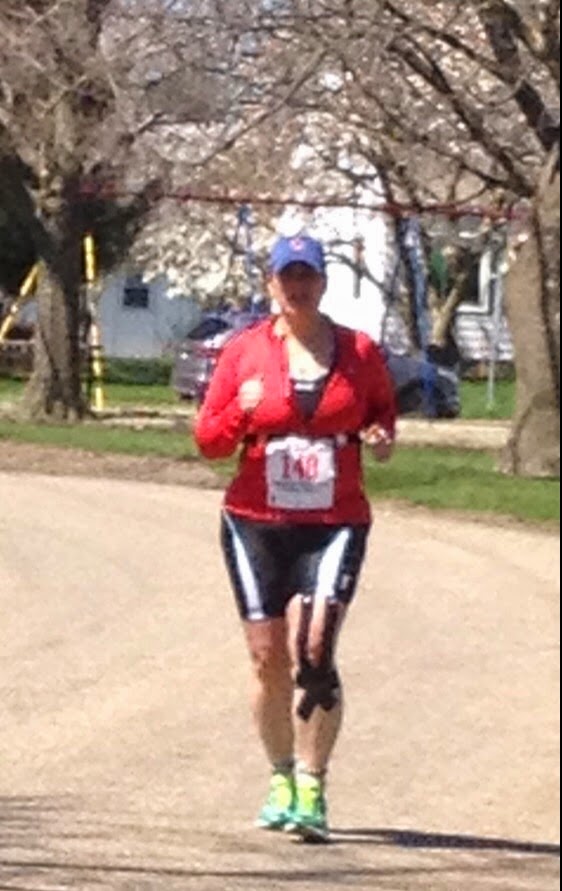 I passed the water station and asked them the distance and they had no idea… gee thanks.  The run was very pretty; a little brook through the middle I crossed a few times, trees starting to bud, squirrels… no humans, I didn’t see any other racers.


Eventually I wound my way out of the trail into the park area.  The volunteers told me I had about ½ mile left, which felt about right though I knew my time was shot.  I wound around the path that edged a little pond with some people fishing and a couple turtles… swimming turtles… I passed them both!!  I am faster than a turtle!!


I knew I wasn’t last so I just enjoyed what was left of the run.  My time was super slow but honestly it was the second best feeling run I have had since I started this (First was the day I realized I could run a mile without stopping or hurting)


I rounded the corner and saw the big blue arch and a little girl in a sparkly pink skirt ran a bottle of water out to me.. She said ‘Can you run faster?’  I said no… she then proceeded to literally run circles around me as I finished!  Yeah… that happened… 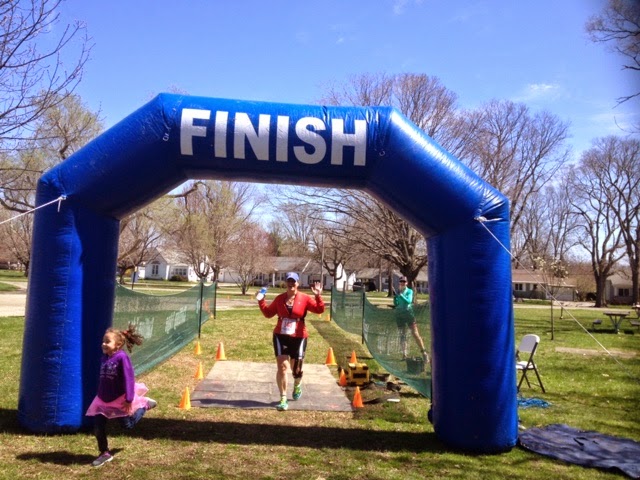 As I approached the finish line my mom and dad were there snapping pictures which, again, I am so grateful for.  That they wanted to give up a weekend for my goal, that they so enthusiastically got involved was really touching. 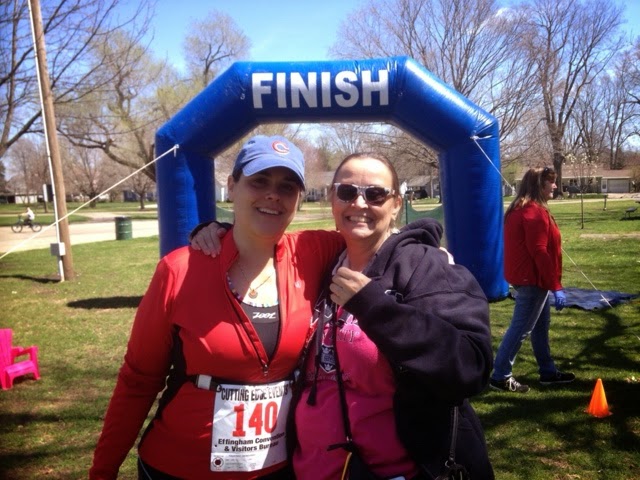 I am glad I picked this one for my first.  It was easy to navigate pick up and transition. That was all very low anxiety.  However, I am really looking forward to having big races where I can (please god!!!) see some other humans and have someone to chase!  My time was slower than I wanted.  The coach says the late start, wind and trail run added time… maybe.  But I know I can pick it up on my training.  I don’t need to be on the podium to be satisfied, but I want to be in the pack of other racers.  I want that energy and vibe I have had from 5ks.  I think with bigger groups I will fit in just fine at the pack of the pack.  I have ordered a Garmin910 and will start to dial in my training which should help with this.


Finally, I am shocked at how great I felt that night and the day after.  I had a bit of tension in my shoulders and I was TIRED!  Otherwise, I felt great!!  No joint pain, nothing achy or out of whack.  Above all else this made me feel great.  I may have been almost slow as a turtle – but I did not hurt myself.  My body can do this and I don’t have to hurt for days after.
Next Tri – EspiritdeShe in Naperville June 14…  I can hardly wait

I made some goals for myself to start out the year and I thought a quarterly check point was a good idea.  The originals are just copy/pasted below and I have added my dated comments. Another 5k in the books and I am loving this race distance.
Packet pick up was at Fleet Feet in Old Town and very organized.  Grabbed a few single packs of nutrition ideas I haven't had the chance to try before and was out the door in less than 5 minutes.
The coach had a meal plan for the day before (smoothi for bfast, carb/protien lunch, salmon and sweet potato and ice cream for dinner) which I followed. 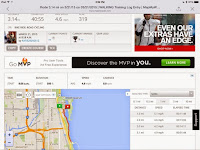 I had a 100 calorie bagel thin with cream cheese and bacon bit about an hour before I left the house.  Going to try something else next time as I think that didn't help the mile 2 issue laer in the day.
A 9:00 am start at Soldier Field meant I took an Uber and had 20 ish minutes to stretch and relax before we started.  The weather was clear and bright but cool in the low 40s.
There was a little confusion around waves but I ended up starting close to the front and I think that helped me keep on pace.  Mile one I was under 12 min which was my goal.  After the turn around/half way point I realized how much I really was in the middle of the pack instead of the back and I got super excited!  So excited I sped up so much I got sick... :25 seconds I will never get back!  Darn.
The last half with the sicking and the wind in my face was much rougher and I walked about .75 of a mile.  Which I did not want to do.
However, I finished in 40:55 three minutes faster than January- so I take the win!!
And, earned my first ever race bling!!!  I had my favorite post race meal of hard rootbeer and the best grilled cheese in town a Cheesies :) 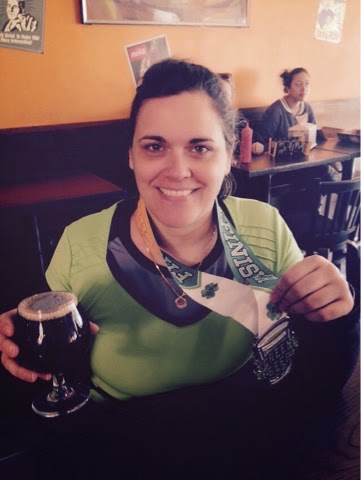 
Have you heard about bloglovin???  I am almost never on the cusp on the internet…  I mean NEVER!  If it were up to me we would all still use paper and beautiful calligraphy – ink pot and all!!  But I stumbled on this and thought I would share – forgive me if this is old news to you.


Why you want bloglovin…


How do you read on this thing??


Just click the title or the words or the picture of the article that looks interesting.  Sometimes you can read the whole post in the next screen, sometimes you have to click after a paragraph to go to the blog.

You can Save things???


Yeah… this might be my favorite part – see under the number 3 there… You click save and you can make ‘folders’ to save articles that interest you.  Then they don’t clog up your feed, but you can find things again.  Genius!  I wish Twitter had this!

But you want to binge read a certain blog cause you just found it and love it???


Under #2 on the right just go directly to the blog site that way.  Read to your heart’s content.  How cool is that!

How do you make your own feed?

Katie
I am the Girl - a middle aged empty nester who decided life is too short to not pursue her own dreams... Leo is the adorable Shiba Inu/Norwich Terrier Archie is the trusty steed So I bought a one way ticket, shipped the bike and boarded the dog - let's see where we land